Using an earth texture as background#

A great resource for freely available earth textures are the NASA Blue Marble images (credit: Reto Stöckli, NASA Earth Observatory) from the Visible Earth collection, which we will also use in this tutorial example.

When working with an equidistant cylindrical representation of global netCDF data, you simply need to load one of these global earth images and make some adjustments. If a global 5400 x 2700 px Blue Marble texture including topography and bathymetry suits your needs, you can start your visualization project by loading the following state file on Mistral: /work/kv0653/ParaviewTutorial/earth.pvsm

If you would like to use an equidistant cylindrical representation with a different texture than the Blue Marble image in the above state file, you have two options. Either you load the PNG image file into ParaView and scale and transform it accordingly, or you texture-map the image to a plane. Below, we describe both of these options:

Option 1: Loading and transforming a PNG image as background# 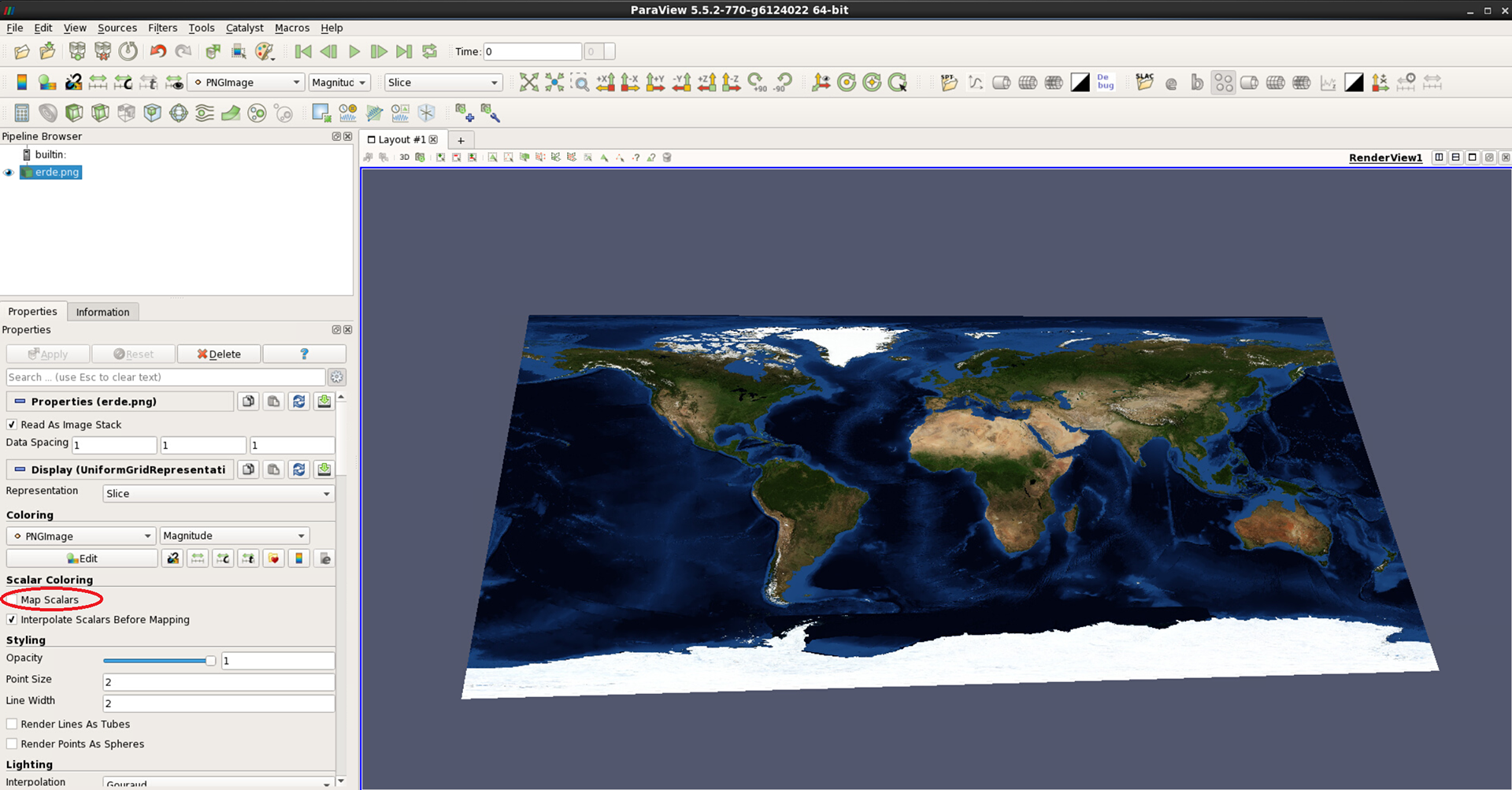 The following Transform values apply to images of size 5400 x 2700 px only and need to be adjusted for larger textures.

To check if your earth background is scaled and positioned correctly, we suggest loading a dataset that clearly shows the signature of oceans and continents, such as surface temperature t in ECHAMH_OM_A1B.nc, which is available in the ParaView tutorial folder on Mistral. Note that you may have to adjust the vertical scaling or position of the dataset.

Option 2: Texture-mapping to a plane#

To create a plane of the proper size, we suggest that you first load the dataset for which you need a background image. This is optional, however, it helps ensure that the plane will be oriented and positioned correctly. Then: 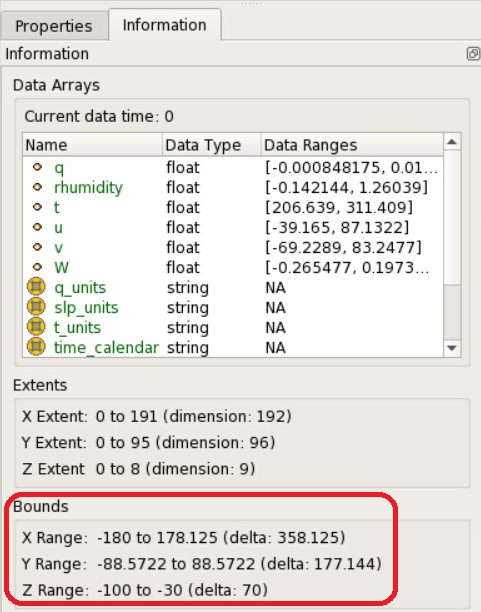 Figure 3: Dataset bounds to be used for defining a Plane

Size and position of dataset and plane will coincide if you enter the bounds of your dataset into the Plane properties as was done in figure 4. Note that the signs of the longitudes have been reversed. To be more exact, one could use -180, 180, -90, and 90 for x- and y-coordinates and 100 for the z-coordinate in the Plane properties. However, at least for the dataset that we used in this example, the texture background would look slightly larger than the data cube, and it would also interfere with the lowest data level. When working with a global dataset, we would therefore suggest using the data bounds in the Plane properties, because the difference in scaling will be negligible.

Figure 4: Setting the Plane properties according to the ECHAM dataset bounds

The next steps will be: 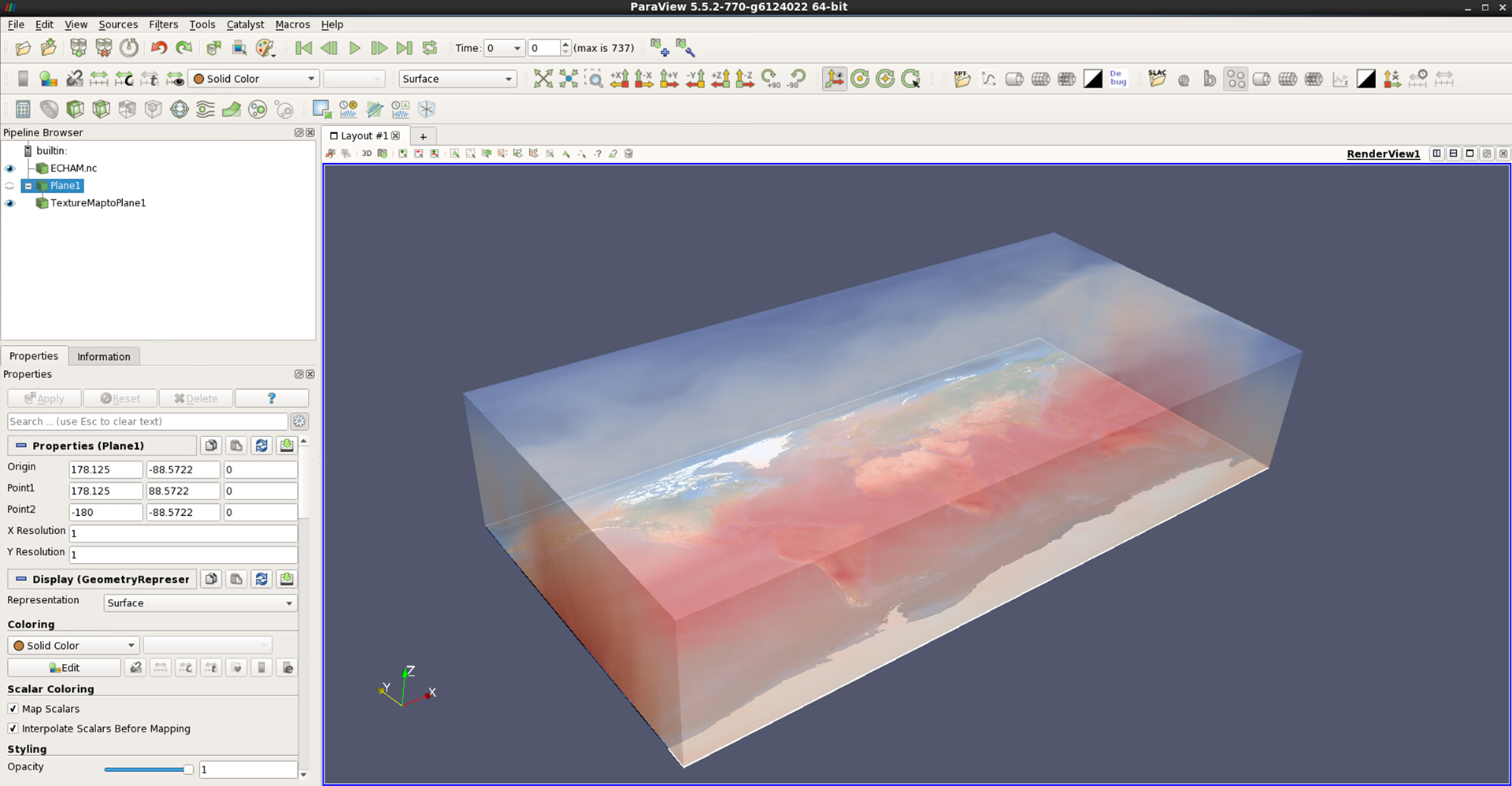 To annotate a spherical representation of climate and earth system data, the earth background image needs to be loaded as a texture and “wrapped around” a sphere in ParaView. The steps, which we are going to cover in detail hereafter, are as follows:

In case you simply try to map the earth image texture from the previous section to a sphere in ParaView, you will notice that the result won’t look right. To solve the issue, you may use one of the following textures from the ParaView tutorial folder.

However, if you would like to use a different one or if you are just curious, we suggest the following steps to prepare the image for spherical texture mapping in ParaView. Using an image editing software of your choice, you need to: 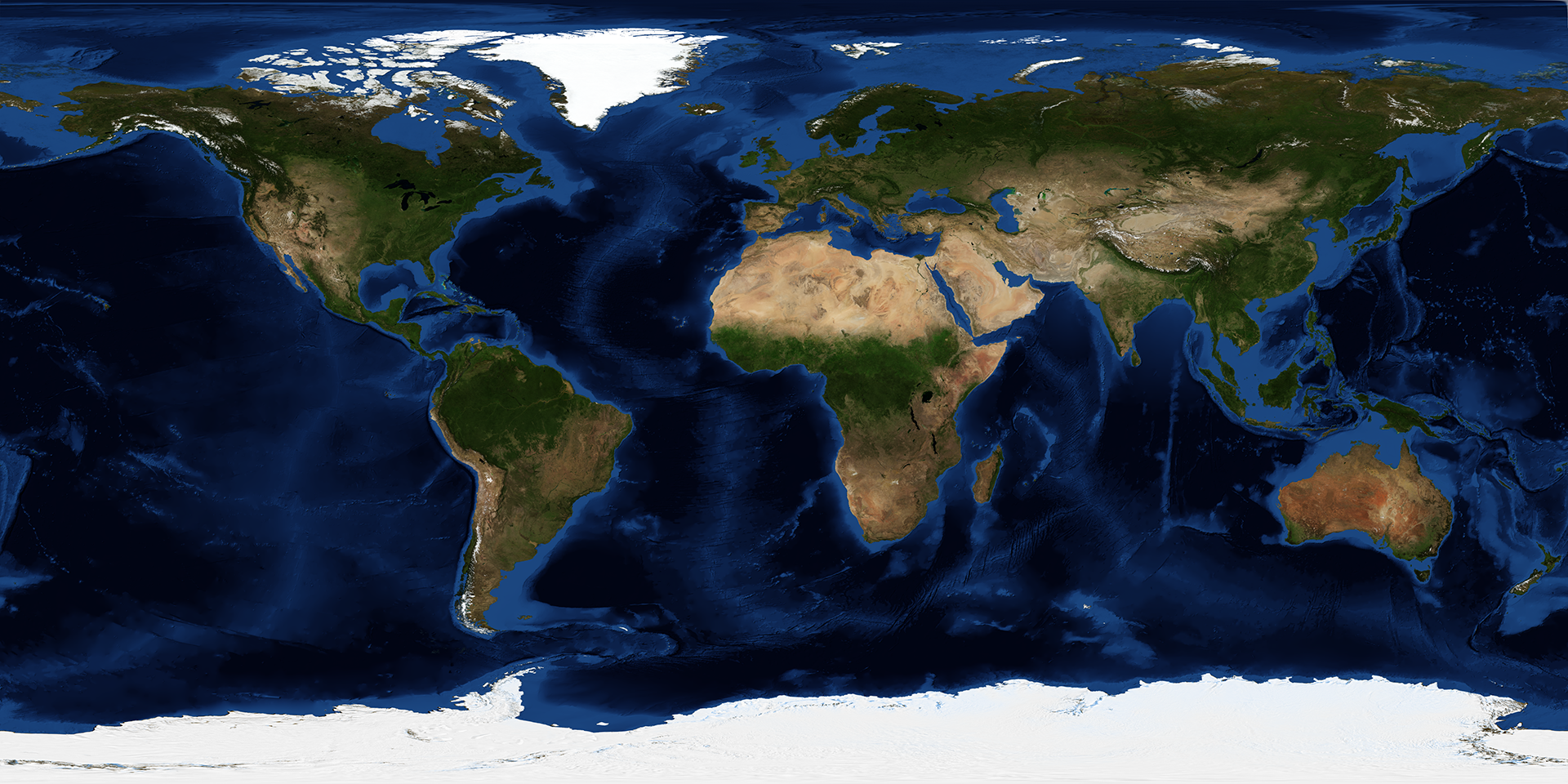 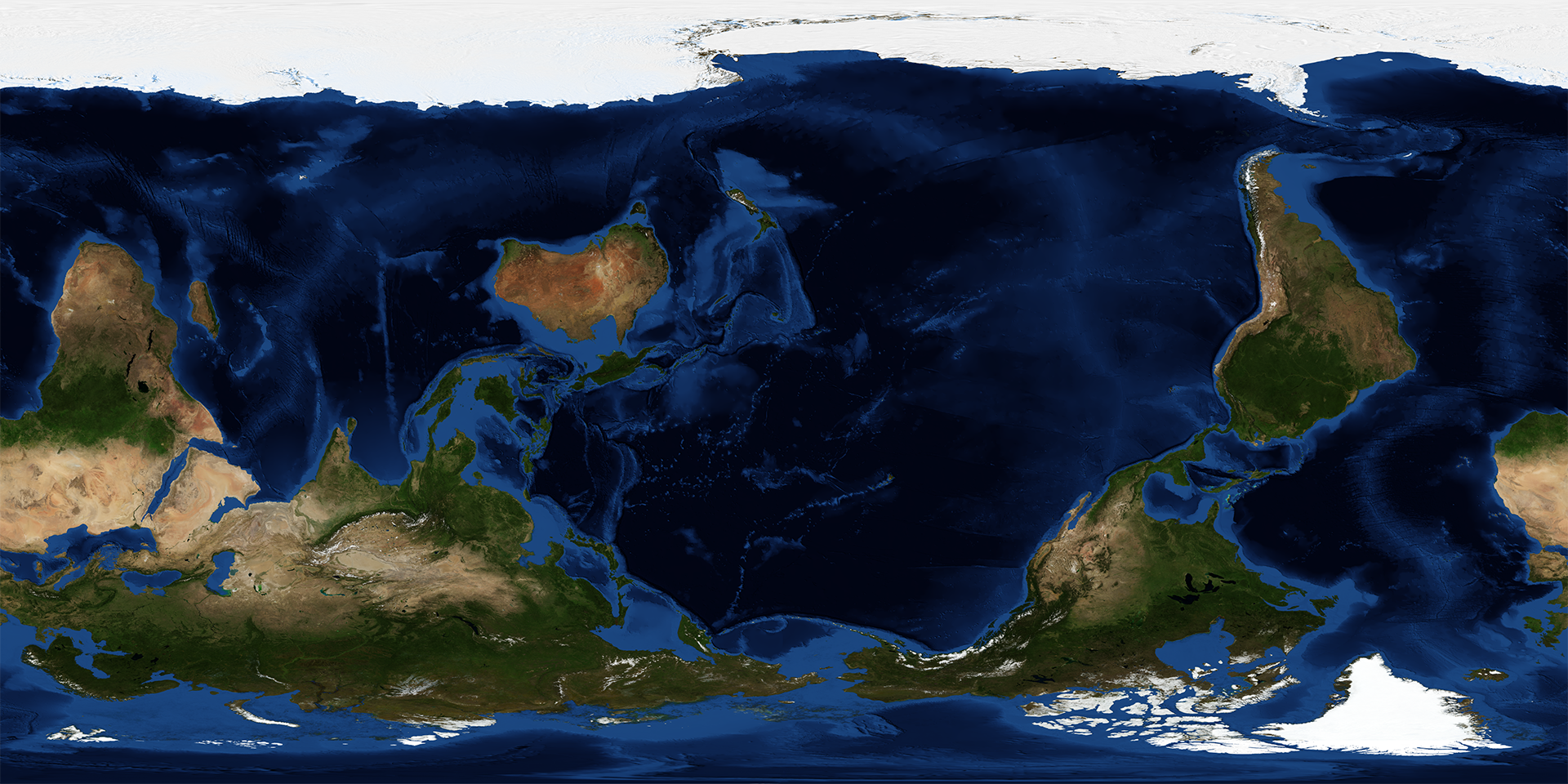 The Imagemagick commands for flipping, swapping and merging are:

Start with an empty ParaView session by either opening ParaView or by clearing the Pipeline Browser via Edit ->  Reset Session.

Compare with the following figure: 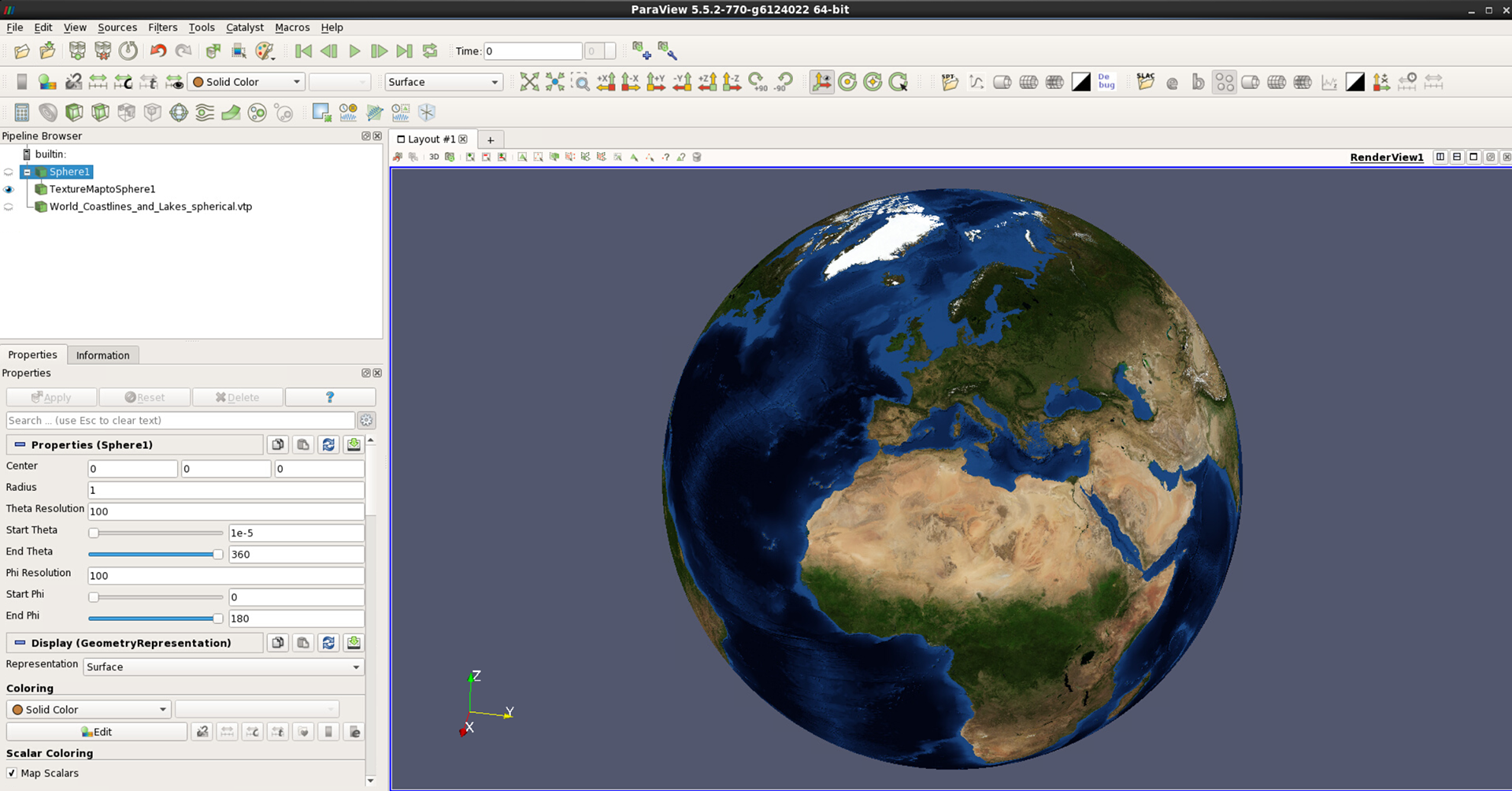 To check the proper positioning of the texture we suggest loading a coastline dataset for spherical projections, such as: /work/kv0653/ERDE/World_Coastlines_and_Lakes_spherical.vtp. 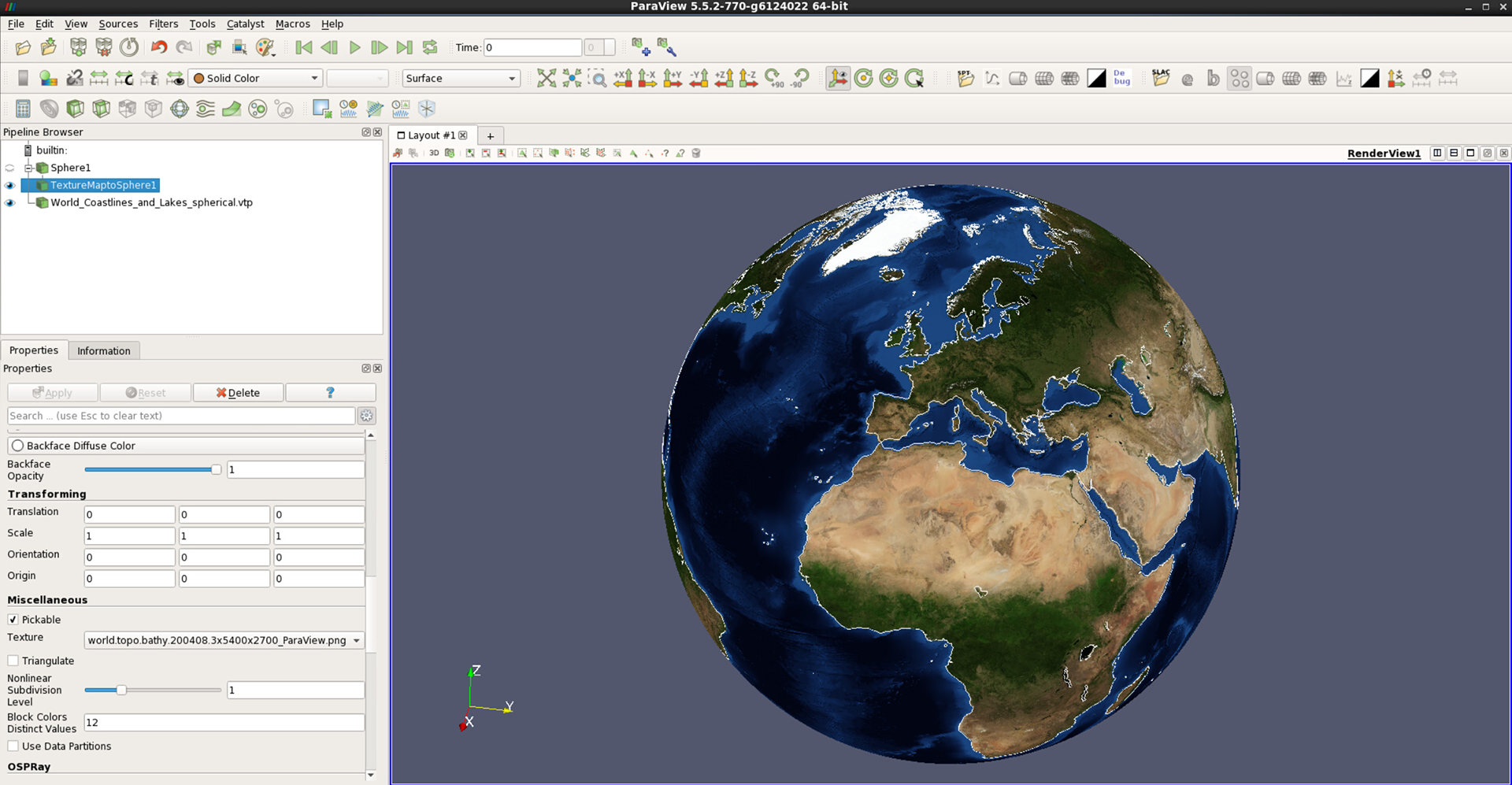 It is possible to extrude topography and bathymetry in addition to using an earth texture. For details on vertical exaggeration using the Calculator module, see here:

The visualization workflow is as follows:

You may want to adjust the lighting of the scene via View -> Light Inspector.

The following figure shows a corresponding screenshot of the equidistant cylindrical projection with the representation set to Surface. 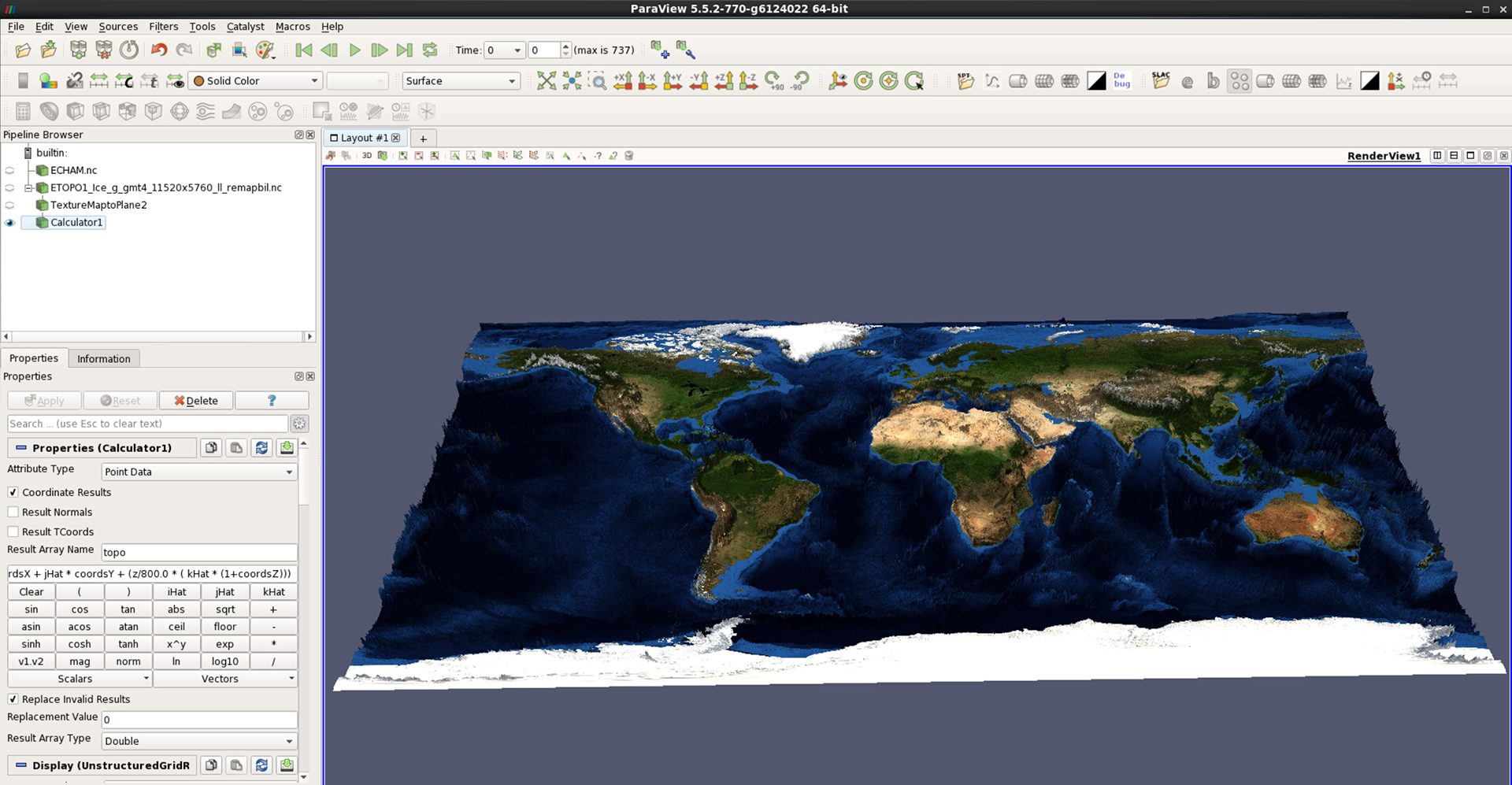 With a spherical projection, the extruded and texture-mapped surface looks as follows: 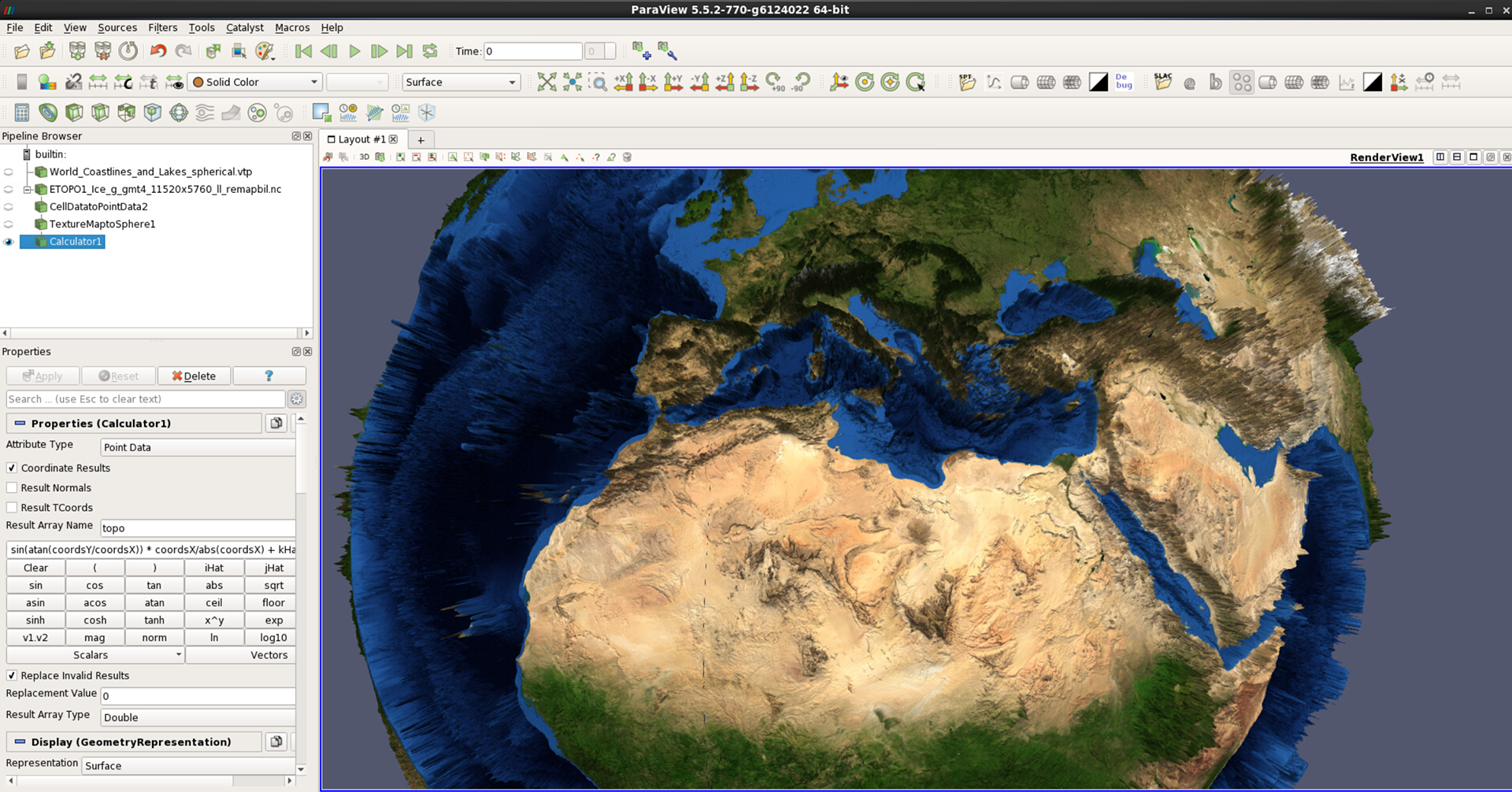 Figure 11: Earth with texture map and exaggerated topography and bathymetry represented as Surface

The topographic and bathymetric features stand out nicely. However, a seam is clearly visible over the Sahara desert in Northern Africa. One makeshift solution is changing the representation from Surface to Points, as was done in figure 11. However, this, too, comes at a cost. Topographic and bathymetric features look significantly less crisp and shaded, and at steep slopes / seamounts in the ocean the point representation becomes obvious. 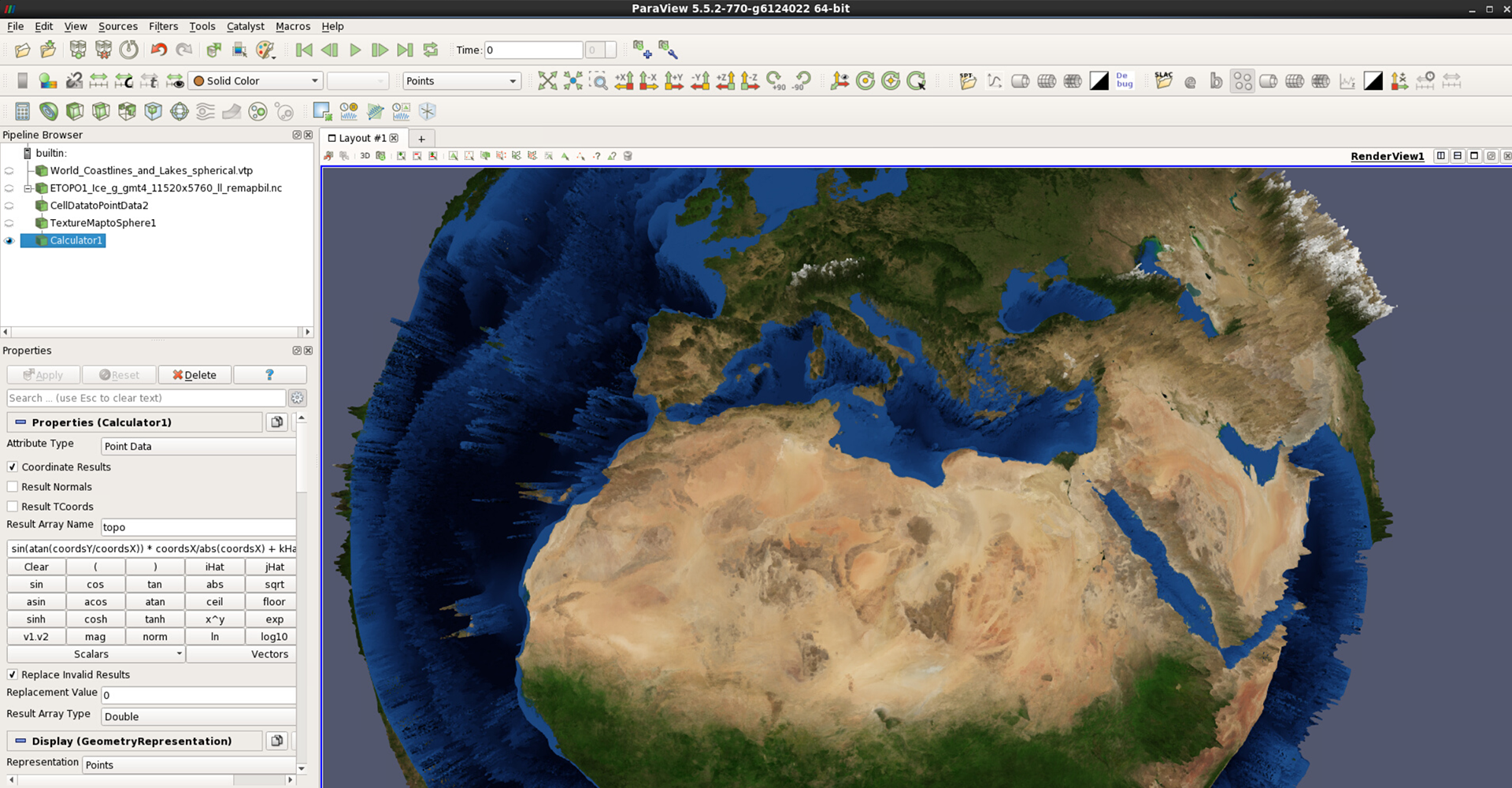 Figure 12: Earth with texture map and exaggerated topography and bathymetry represented as Points

When done, remember to save your ParaView visualization project as a state file.